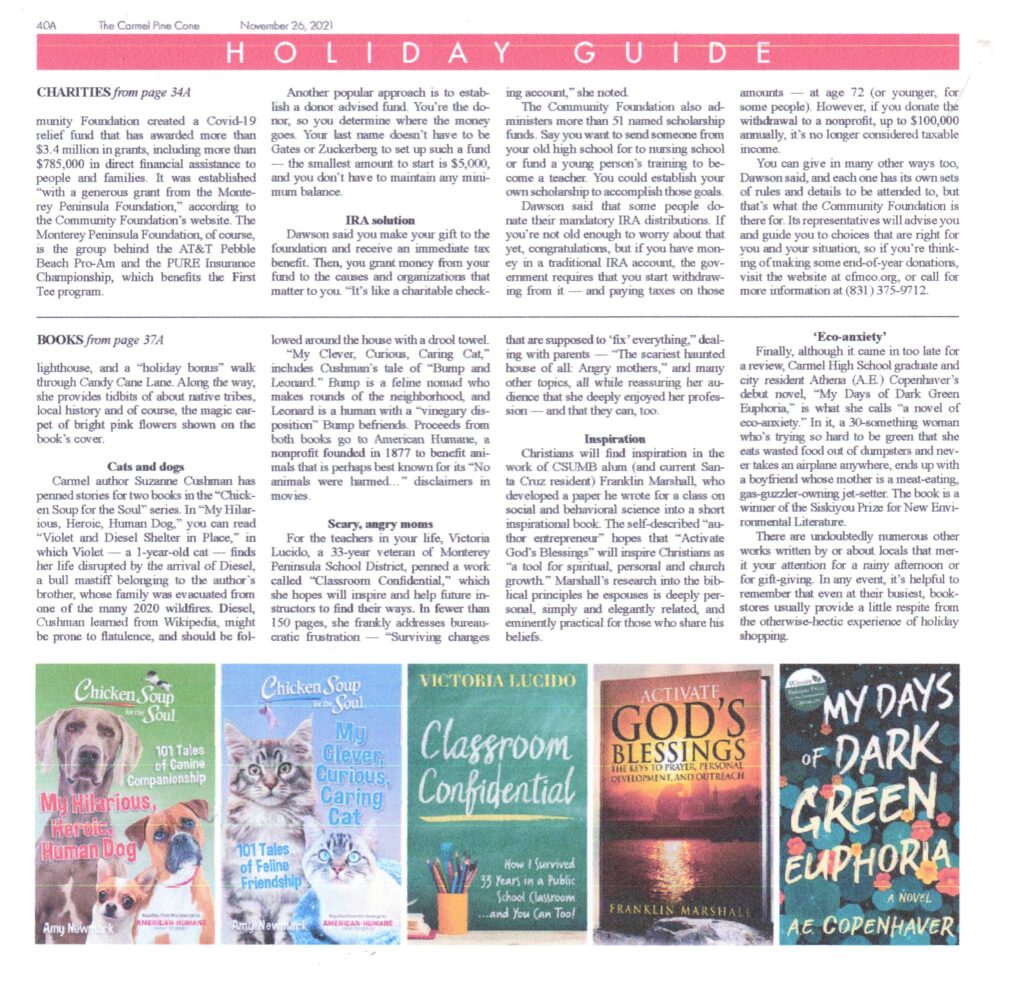 A Veteran Teacher’s Classroom Tips to Avoid Burnout and Thrive

NEW YORK— September 22, 2020—Morgan James’ new release, Classroom Confidential: How I Survived 33 Years in a Public School Classroom…and You Can Too! by Victoria Lucido, is a wisdom-packed manual for new and struggling teachers. Classroom Confidential provides much-needed support to the often overworked, under-appreciated educators who are shaping the nation’s youth and future.

Surveys have found that nearly 30% of all teachers leave the profession within their first five years of teaching. This can be attributed to the many hurdles educators face, from lack of funding and support, to stress of classroom management, to the struggle of finding work-life balance. Award-winning teacher Victoria Lucido not only outlasted this statistic, but she thrived for more than three decades as a teacher. She shares her secrets to success in Classroom Confidential.

Victoria Lucido tells it like it is, giving educators the inside scoop on what they really need to know in order to make it as a teacher. She offers tips on classroom management, lesson planning, professionalism, fitting in with coworkers, and parent-teacher dynamics. Tens of thousands of new teachers enter the field every year. Classroom Confidential: How I Survived 33 Years in a Public School Classroom…and You Can Too! will provide the tens of thousands of new teachers each year with the tools they need to be confident and prepared in the classroom and to enjoy a long, happy career as an educator.

If you would like more information about this topic, or to schedule an interview with Victoria Lucido, please call Nickcole Watkins at 516.900.5674.

Victoria Lucido taught for 33 years in Monterey Peninsula Unified School District. In addition to earning a Bachelor’s degree in English from San Jose State University, Vickie graduated with a master’s degree in Education from University of New England. She has been recognized seven times by “Who’s Who of American Teachers,” was awarded “Monterey Teacher of the Year” in 1999 by Monterey Rotary, received the “Mildred Willemsen Award for Excellence in Teaching” in 2011, and was named an “Art Hero” by the Monterey County Office of Education in 2018. Upon retirement in 2018, the Colton Middle School Stage was dedicated to her by Superintendent PK Diffenbaugh and is now called “The Victoria Lucido Stage.” Victoria currently resides on Monterey Peninsula, California.

More About This Title:

During 33 years of teaching English and drama to middle school students on the Monterey Peninsula, Victoria Lucido bought a lot of books on how to do it better, smarter, with more impact, effect, patience. Yet she never read them, not from cover to cover, and some, she never creased the binding.

It wasn’t that she already knew it all or was already better or smarter or more patient than anyone else. At least, not in her eyes. Truth is, she was too busy, too overwhelmed, too tired to sit down and read a Danielle Steel novel. Besides, the choice between reading a book and reading her students’ papers wasn’t really a choice. She had a lot more learners to worry about besides herself.

The books she did peruse weren’t very helpful, filled with statistics that weren’t meaningf ul and advice by authors who’d never set foot in a classroom except, maybe, to observe. How do you get inside the concerns of a lion from outside the cage?

But 33 years of teaching, of working with students, up close and personal — her 2018 retirement missed the pandemic — gives a girl some cred. Whether Lucido ever planned on writing her own book while down in the trenches, as soon as she retired from Colton Middle School, she realized she had been researching her text and developing her perspective for decades. All she had to do was write it down. Pretty much.

Lucido’s debut book caught attention and acceptance from Morgan James Publishing after she followed the classic advice by most writers’ groups, adult-ed classes, editors and authors. She picked up a copy of what some folks call the “writer’s bible” — “Writer’s Market,” a tome, which helps authors learn how to market and sell their writing to publishers — and made a list of 10 publishers that seemed to focus on her book genre.

Not every writer meets with such rapid success. But Morgan James said, “I think you have something here.”

Lucido named her book “Classroom Confidential” in homage to the late Anthony Bourdain’s “Kitchen Confidential: Adventures in the Culinary Underbelly” and because, like many writers, she likes alliteration, and because her pages are filled with advice new teachers might not know, and tired teachers might not remember. And maybe none of them learned these tricks of the trade when they were training. But they should have.

“I truly had never found a book that deals with the day-today challenges in the classroom,” said Lucido from her Del Rey Oaks home. “I wanted to suggest what teachers should tell a substitute teacher; or what to prepare and present for backto- school night.”

She also offers a chapter on “dressing the part” and why it matters. Sort of a wear what will give you authority but accessibility in the classroom, what will tell colleagues you’re a team player in the teachers’ lounge, and what will suggest to the superintendent you’re serious about your career.

“The students’ initial glimpse of you is paramount to your success for the entire year,” Lucido wrote. “And there are consequences to dressing too casually. Carefully selecting an outfit which was businesslike but also feminine was very important to me. I wanted to send the message that I was there to teach, and still I was approachable.”

Dramatic Entrance “Classroom Confidential” reads like it was written by a drama teacher and edited by an English teacher.

A Monterey native who studied her way through Monterey Peninsula Unified School District schools, the local girl went off to college at San Jose State and then returned home. Someone who took to the stage early, Lucido has always been a “drama person” and is still participating in community theater. Although she had her heart set on majoring in theater and performance, working to put herself through college meant she was performing on the job when others were performing on stage.

Instead, she majored in English, which led her career into the classroom. Yet, in tandem with teaching English she also taught drama throughout her career.

Lucido made plans to retire before she knew if she was ready. It was a decision she understood and accepted only after she had done so.

“I had planned to continue teaching for one more year,” she said, “when the district offered a buyout to retire. My first thought was, ‘I’m not ready.’ But the school was moving to a new instructional model, and I didn’t want to reinvent my teaching style and curriculum for one year. It was heartbreaking, but I felt it was meant to be.”

Three years later, she knows it was the right decision. Shortly after she’d cleaned out her classroom and hugged everyone goodbye at her farewell party, Lucido began writing her book, began putting on paper everything she believed, understood, and knew about kids and what they need to learn, and about teachers and what they need to be successful.

“Kids are kids,” she said. “Things change, but they don’t. They want to be seen, to feel they belong, and to know we care about them. That’s never going to change. The human connection is what brings kids and teachers to school. My book is intended to help teachers foster that connection in the classroom.”

Lucido has been recognized by “Who’s Who of American Teachers” seven times, was awarded “Monterey Teacher of the Year” in 1999 by Monterey Rotary, received the “Mildred Willemsen Award for Excellence in Teaching” in 2011, and was named an “Art Hero” by the Monterey County Office of Education in 2018. She also wrote, directed, and performed in her own one-woman-show “Pretty.”

Meet Victoria Lucido, author of Classroom Confidential. Her eBook is available now wherever eBooks are sold!

Victoria Lucido taught in the Monterey Peninsula Unified School District for 33 years, mostly at Colton Middle School. She wrote a book about it titled Classroom Confidential: How I Survived 33 Years in a Public School Classroom… and You Can Too! Which sounds like an advice book, which it is. But it also offers non-teachers her personal tour through the teaching profession. “Think twice before agreeing to teach summer school,” she writes. “If you need more money in the summer, it would be better to be a waiter, a golf caddy, or anything but a teacher. Summer is the time to refresh and rejuvenate.” And here’s another: “The school custodian and the school office supervisor can make or break your career.” Which sounds dramatic, but Lucido also taught drama. She admits that she’s of the old school, thus passages like “I’ve always believed students should have a healthy fear of their teachers.” Which sounds kind of Machiavellian, but is interesting. One chapter is titled “Staff Meetings: A Necessary Evil or a Complete Waste of Time?” You can get the book on Amazon, or get it delivered by emailing vickielucido@gmail.com. victorialucidobooks.com

Monterey >> The Walter Colton Middle School drama club has been under the watchful eye of Vickie Lucido for a little more than a quarter century. But the longtime drama teacher is making her final curtain call this week after 27 years as director of the program.

Lucido, 60, started working for Monterey Peninsula Unified School District in 1985, teaching drama at Fitch Middle School, which is now known as Seaside Middle School. She wound up leaving after she heard it was scheduled to shut down in the 1990s.

Since then, she’s been the drama, English and social studies teacher at Walter Colton.